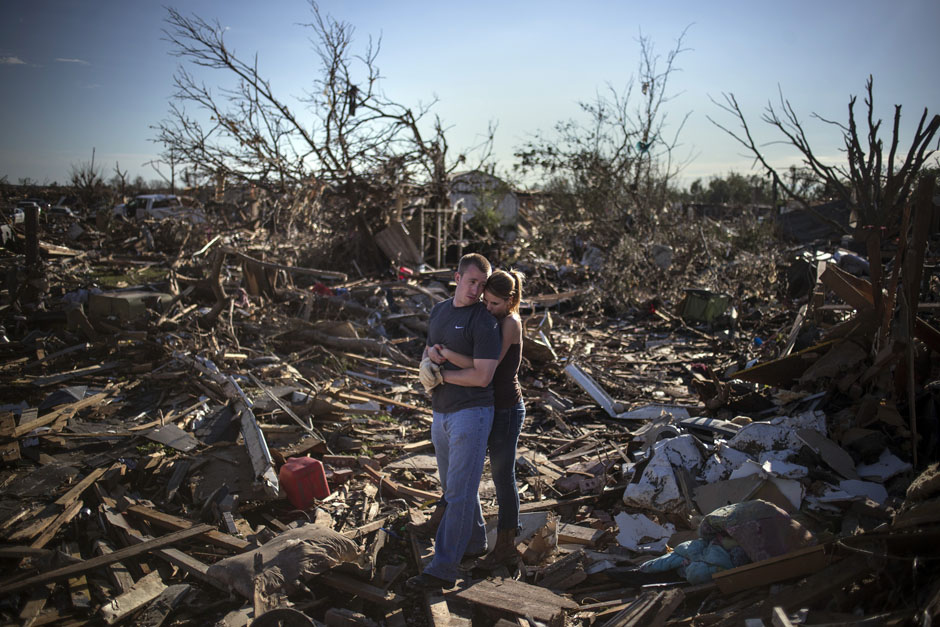 A demonstrator is shot by rubber bullets as riot police charge after clashes erupted during a protest against corruption and price hikes in Rio de Janeiro, Brazil.

Michael Knaapen and John Becker, who married seven years ago in Toronto, Canada, react to the news that the Supreme Court struck down the Defense of Marriage Act (DOMA).

A man dressed as Superman smiles at patient Joao Bertola, 2, and his father at the Hospital Infantil Sabara in Sao Paulo, Brazil.

Tammy Holmes and her grandchildren take refuge under a jetty as a wildfire rages in the Australian town of Dunalley.

An anti-government protester gives a rose to a Thai soldier at the Defense Ministry during a rally in Bangkok.

Thania Sayne leans on the headstone marking the grave of her husband, who was killed in Afghanistan in 2011, at Arlington National Cemetery.

Garrett McNamara attempts to break the Guinness World Record for largest wave ever surfed on in Nazare, Portugal.

A boy carries his dog through floodwaters brought by the monsoon rain in Manila, Philippines.

Catholics take photos with their phones and tablets of the newly-elected Pope Francis as he speaks from the central balcony of St. Peter’s Basilica at the Vatican.

Renata Teodoro, 25, right, holds hands with her mother, Gorete Borges Teodoro, who was deported six years ago from the U.S., through the bars of a border fence in Nogales, Ariz.

A woman tries to stop a military bulldozer from hurting a wounded person after clashes between security forces and opposition groups that left hundreds dead in Cairo.

An Indian youth dangles from a power line before diving into the floodwaters of an overflowing Ganges river in Allahabad in August.

A Pakistani man carrying a child rushes away from the site of a car bombing in Peshawar, northwest Pakistan.

A young man jumps from the Yangtze River Bridge in Wuhan, China, into the river following another person who committed suicide minutes earlier.

A man rescues a woman from her car on a flooded road in the Athens suburb of Chalandri in February.

A boy looks into the National Zoo in Washington, D.C., which was temporarily closed due to the government shutdown.

A woman sits prayerfully while her head is shaved to mourn the late Cambodian King Norodom Sihanouk ahead of his funeral in Phnom Penh, Cambodia.

Afghan boys play with toy guns on the first day of Eid al-Adha in October.

A Bahraini anti-government protester is engulfed in flames after a shot fired by riot police hit the gasoline bomb in his hand that he was preparing to throw.

Bill Iffrig, 78, lies on the ground as police officers react to a second explosion at the finish line of the Boston Marathon.

Runners observe a moment of silence for the victims of the Boston Marathon bombings before the start of the London Marathon in Greenwich, southeast London.

Visitors watch water gushing from a section of the Xiaolangdi Reservoir on China’s Yellow River during a July 6 operation to remove built-up silt.

Figo, a Kentucky police dog, pays his last respects to his human partner, Officer Jason Ellis, who was killed in an ambush five days earlier.

Survivors of Super Typhoon Haiyan, which left 1.9 million homeless, take part in a religious procession in Tolosa on the eastern Philippine island of Leyte.

Riot police guard gay rights activists who have been beaten by anti-gay protesters during an authorized gay rights rally in St.Petersburg, Russia.

George Zimmerman winks at his lawyer at the start of his trial in Seminole Circuit Court.

A boy holds his mother’s leg as he cries in front of their damaged house after a strong 6.6 magnitude earthquake at Longmen village, Lushan county in Ya’an, Sichuan province.

Capt. Michael Potoczniak marries his partner Todd Saunders, in a ceremony in San Francisco on June 29.

A Turkish riot policeman uses tear gas against a woman as people protest against the destruction of trees in a park brought about by a pedestrian project, in Taksim Square in central Istanbul.

An Air Force sergeant surprises his wife and daughter during the second quarter of a game between the New York Giants and the Green Bay Packers.

A couple runs near riot police gathered at the Mane Garrincha Stadium in Brasilia, Brazil, on Sept. 7 before the international friendly soccer match between Brazil and Australia.

President Obama looks out the “Door of No Return” on Goree Island off the Senegalese coast, which was the last stop for millions of slaves sent to the New World.

Women carrying children run for safety as armed police hunt gunmen who went on a shooting spree in a shopping mall in Nairobi, Kenya that left 67 dead.

Rescue workers carry a child who was rescued from the rubble at the site of a collapsed residential building in Mumbai, India, in September.

Pope Francis blesses and prays with a severely disfigured man.

An Indonesian child watches as ash spews out of Mt. Sinabung.

Newly-born Bea Joy sleeps as her mother recuperates in a makeshift birthing clinic at the airport in typhoon-devastated Tacloban. Ortega was in an evacuation center when the storm hit and had to swim and cling to a post to survive.

The first same-sex couple to be married in France kiss on the balcony in front of the crowd after their marriage at the city hall in Montpellier.

Miles, a five-year-old battling leukemia, is dressed as “Batkid” as part of a day arranged by the Make-A-Wish Foundation in San Francisco on Nov. 15.